Histogram discrepancy between Lr and Ps

I’ve finally acquired a printer (Canon Pro-1000) so I’m very excited to get printing. To prepare my files for print I realize I can’t really trust my eyes as much as I can the histogram to tell me whether my whites are white and my blacks truly black, without clipping or blowing out. My problem is this: I do my basic prep work in Lightroom and typically send it over to Photoshop for everything else and then send it back to Lightroom. Both Photoshop and Lightroom are using the same colour space - ProPhoto RGB. But the histogram in Photoshop isn’t the same as it is in Lightroom. The have the same general shape but they are definitely different and tell a different story. I don’t understand why there is this discrepancy. I’ve included screen shots of both histograms. Would really appreciate any help on this. 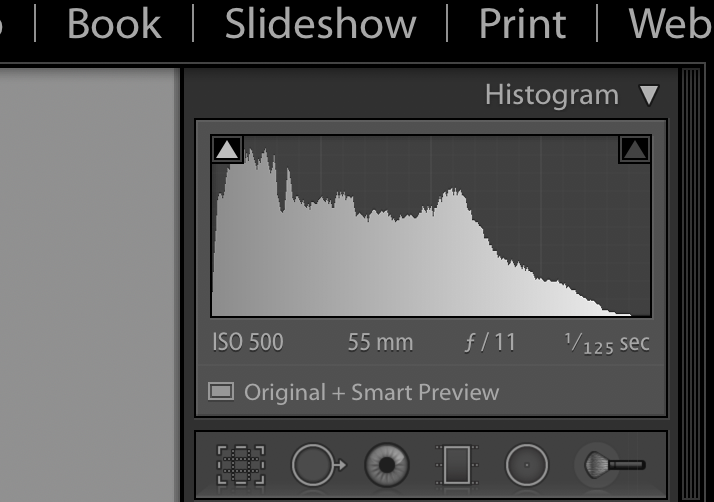 Happy Holidays. The issue comes from different color spaces that these programs utilize. Visit here for some reasonable explanations for these differences: https://www.lightroomqueen.com/community/threads/histograms-in-lightroom-and-photoshop-dont-match.12472/ …Jim

Kerry, the difference could be the algorithm used to generate the histogram in PS vs. LR.

In any event, the best way evaluate print tonality is to make test prints on the paper you plan to use. The reason is because there will be differences between print and what you see on the monitor, even if your monitor is calibrated to get the best match between print and screen.

Also, a good practice is to avoid ‘round-tripping’ between programs. A suggested workflow is to do what you need in LR, open in PS, soft-proof in PS** and then print from PS.

**Soft proofing will give you a reasonably good idea as to what the final print will look like, but it’s not a be-all, end-all; you still need to make test prints.

Perhaps @Keith_Bauer can chime in here, too.

Something doesn’t add up here. Sounds like you’re fine with color spaces. Even that would not cause the discrepancy you are showing here. I just took a look at several images comparing the histogram from LR and PS. I could not find any that didn’t match quite closely. Here’s a sample: 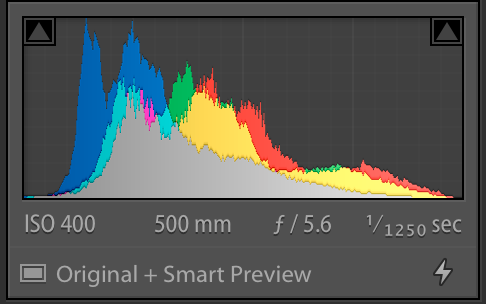 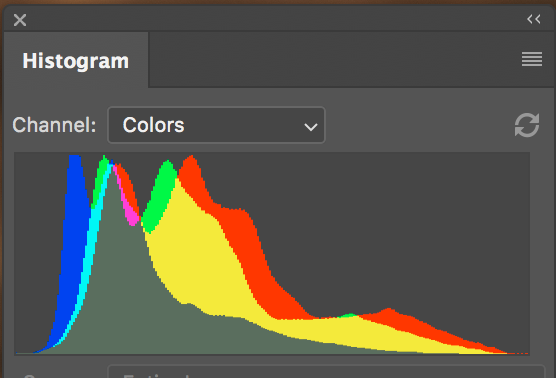 As you can see, same general shape and info. The histogram you shared from PS just doesn’t look right based on the one from LR. Any adjustments made to the image in PS?

I’d like to see the completely unedited histogram from LR and PS by just opening the file in PS. Are you using 16 bit in PS?

Hi @Keith_Bauer I am using 16 bit. I am attaching a screen shot of the histogram of the RAW file in Lr and the same file exported over to Ps. Similar but clearly not the same even in RAW 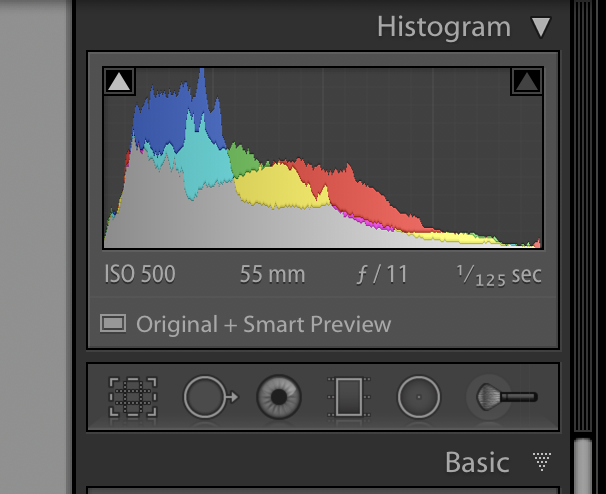 Those two histograms are nearly the same. If you press the triangle in the upper right of the PS histogram it will update as that symbol means it needs to be updated to be accurate. The width scale and height scale are just a touch different, but both still tell the same story with the values shown.

So what is the difference between those histograms and the ones you posted when this thread started? They don’t even look like they are from the same image and the one from LR is just a luminance histogram with no channel info.

@Keith_Bauer - Okay, so what I did was this. I took the colour image according to the histogram you are looking at and, in Lr made basic changes (highlights, shadows, blacks, whites) and then sent it over to Ps. In Photoshop I converted the colour file to a black and white file using the TK 6 action panel - Clicking on “Color”, then “Create” making some adjustments with the colour sliders and then clicking on “B&W” and making the conversion. And that’s where the histogram changes, I can see that now. From there I went through a series of adjustments - contrast, dodging and burning, vignette etc. and then sent the image back to Lr for storage. Am I doing something wrong? This was the method that I gathered Sean Bagshaw (and Tony Kuyper) recommend for B&W conversion using the TK Action panel.

@Kerry_Gordon - Just to clarify something for sure. So in your original post, the first histogram you posted is the histogram in PS after you’ve processed the image and converted to a B&W. The second histogram you posted shows the original image in LR from the color image (with any LR adjustments), but before you sent it to PS to do processing. Is that correct?

If so, why would you think the histograms would look the same?

Your workflow that you described is fine. The image you got back after the work in PS is either a PSD or a TIFF depending on a LR setting. You should not do any further Develop module processing on that image because if you then ever want to take it back to PS again and include any of that additional processing you’ll see a flattened version of the image.

@Keith_Bauer Not exactly, Keith. In the original post the first image of the histogram represents the completed image after it had been sent to Ps, converted to black and white with all the post processing done in Ps. The second histogram image is of that same file after it was sent back to Lr but not touched - left exactly as it was in after it left Ps. That’s why I’m mystified - it’s the same image whether in Lr or Ps, why not the same or comparable histogram?

@Kerry_Gordon If you look at the second histogram you posted, it could not be from the Photoshop processed image because at the bottom of the histogram it says “Original + Smart Preview”. That means it is a RAW file. The file that came back from PS is either a TIFF or a PSD. I’m assuming you have the default behavior in place for images that are processed in LR, then sent to PS, worked on, then returned to LR. They are stacked in a logical stack. The default behavior is image 1 of the stack is the PSD (TIFF) and image 2 is the RAW file. Double check you are looking at the PSD file once back in LR.

You are looking at a raw file. I know you think you are looking at the file from PS, but you are not. Photoshop does NOT ever write raw files. When you did a Save As, you broke the communication between PS and LR, so the file you wrote back is saved on the disk in a folder, but it was never added to the LR catalog. I’ll bet the PSD or TIFF that you saved from PS is not even visible in LR because using Save As is a perfect way to break the communication. You need to synchronize the folder you wrote the PS file to when you did a save as.

In LR Library, find the folder you wrote the file to using Save As from PS, right click on it and choose “Synchronize Folder…”. Follow through with the synchronize and I’m guessing you’ll find at least one file that needs to be added to your LR catalog and it will be the file you saved from PS. It will be either a PSD or a TIFF.

If you look near the bottom of the screen in LR while you are in the Library module you should see the full name of the file you are looking at. I’m attaching a quick screen shot. Look at the file name. Depending on camera system it will have a raw suffix like CR2, or NEF, or ORF or some other RAW file suffix. In my example you’ll see a cr2 file. After you get the PSD or TIFF file visible in LR after synchronize, you’ll be able to see the file name and the suffix.

You should NEVER do a Save As from PS. You should always do a Save. If you want to rename a file, use LR to rename. This is a classic error people make using LR and PS.

@Keith_Bauer I just wanted to say thanks for helping @Kerry_Gordon with this somewhat vexing issue. You have gone above and beyond the call!

@Keith_Bauer Your help has been invaluable. I have had this feeling all along that I shouldn’t be using “save as” but I always ended up with a file in Lr so I thought it was fine. Now I’m seeing why it isn’t and I won’t make that mistake again. I’ll go back to where I’ve done it in the past and make the corrections as you’ve suggested. Merry Christmas and thanks.

@Keith_Bauer Keith, after re-reading your note, I don’t think what you’re suggesting is actually a problem in my case. Let me try and explain. When I click “save as” in Ps (and I realize this is probably not a great idea for other reasons anyway,) I don’t send the file to Lr but rather to my external hard drive. I then go to my hard drive and transfer that file to Lr. So the file in Lr is connected and in contact with my catalogue in my hard drive. If that weren’t the case the image in Lr would have an exclamation point or a question mark, I can’t remember, indicating that the image in Lr isn’t connected to the catalogue and therefore, even though I can see it, I can’t actually do anything with it. Do I have that right? Anyway, the “save as” files that are now in Lr, when I look near the bottom of the screen in the Library module, do have a .tif suffix. So, from my understanding, they are in connection with my catalogue on my hard drive and should be exactly the same file as the one in Ps. So, if I understand all this, I still have the question about the difference in histogram.

It sounds like you saved the file from PS using save as to a different drive / folder. Then you say you “transfer that file to LR”. I’m assuming that means you Imported the file into LR. Doing that is fine so now you have the Tif file known to your LR catalog.

By the way, when you re-edit your Tif file starting from LR… You are going to go to the Photo Menu, then Edit In…, then Photoshop CC xxxx. You’ll get a dialog box that pops up. The choice you want is “Edit Original”. If you choose “Edit a Copy with LightRoom Adjustments”, you’ll end up with the file in PS with all of the layers merged which is a terrible workflow. If you don’t see this dialog box at all, you are editing a RAW file. That’s the way LR works. You will only see this dialog box when you are editing a file that is NOT a RAW file. Here’s a copy of the dialog box just for clarification.

Did you take the TIF file that you edited in PS that is now back in LR to the LR Develop module and do any adjustments on it there?

@Keith_Bauer Curiouser and curiouser. The image that I have in Lr that came back from Ps has, under the Lr histogram - “Original + Smart Preview” but at the same time it is designated as a .tif file. I didn’t do anything to the image after I sent it back from Ps - I rarely, rarely do. In the end this might all be moot since I plan to do my soft proofing in Ps and print from Ps as well. As long as I work from the Ps histogram, things should work out fine.

If you imported the tif into Lightroom could you have applied a preset on import? Try clicking Reset to make sure there are no adjustments being applied.